Finally we have got the update that you have all been waiting for. It’s taken a while, I know, but as they say “better late than never”.

First off the following three CD’s are officially available for purchase by clicking on the link below. Daniel MacMaster, Sweet Teaze and Dirty Rhythm. I have got them in my hand and they look and sound freakin’ amazing!! I couldn’t be more proud of the product.

Next up, the news only gets better with two more A grade signings. In Suncity Record’s quest to scour the globe for the best of what hard rock has to offer, we have definitely hit the jackpot!! Stopping by the beautiful country of Canada. We have been lucky enough to secure Canada’s finest two hard rock bands Slash Puppet and Ana Black and we are all so excited that these great bands have joined the Suncity family in the pursuit of keeping the flame alight.

Starting first with Slash Puppet. Most people know Slash Puppet for their stunning 1993 self-titled release but what a lot of people don’t know is that they had an awesome debut album they released in 1989 as a cassette only issue. Suncity Records will be presenting their classic debut with all the typical Suncity perks. Once again, this album has been going for top dollar on Ebay and for a very good reason. Slash Puppet’s major features are great attitude, massive gang backing vocals, excellent production and an awesome image. You couldn’t really ask for more in a hard rock release.

After well over a year trying to hunt down the masters, with many leads from many people, we have finally got lucky big time!! These classic recordings will be presented in their full glory and believe me, they sound better than ever. Better news yet, this CD will be released early 2007.

I was never lucky enough to see Slash Puppet live in concert but from all reports they really ripped it up, with a stage show that had more energy than a nuclear power plant.

When it comes to the music, think Skid Row, Britny Fox, think fellow Canadians Smash L.A., Slik Toxik, Sweden’s finest Swedish Erotica, even the great Polish outfit, Lessdress. Vocalist Mif’s attitude will jump out of your speakers, grab you by the scruff of the throat and wack you over the head from the very first second of the very first track.

Make sure to check out lead vocalist, Mif’s awesome My Space site at – www.myspace.com/mifmaster

Check out the track “Evil Woman” off the upcoming Self Titled album for a great idea of how good these guys really are.

The other signing we have for you is wait for it… the signing of my favorite Canadian band ever in the excellent Hollywood legends, Ana Black. 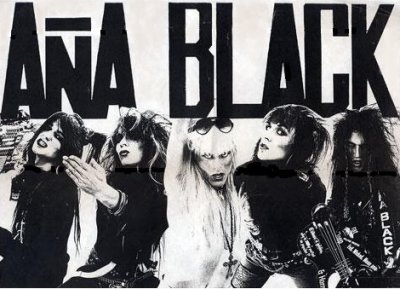 Just when you thought the hard rock heights of Motley Crue’s Dr. Feelgood would never be matched again, well every hard rock fan will be overwhelmed with how good this band are. To me, they are Canada’s answer to Motley. I truly believe they are just as good musically and in attitude and I don’t say that lightly.

Ana Black had a massive following in the late 80’s, early 90’s not only in their hometown of Kingston, Ottawa, Canada but they were one of the biggest hits on the world famous Sunset Strip in Hollywood, California. So much so they attracted interest from Sony/Epic Records. On the back of the major international success of Motley Crue’s Dr. Feelgood, Sony thought these guys may just be the next big thing and therefore they were signed. Gearing up to push the album “Who Killed Hollywood?” with all the money and backing Sony could throw at them, it was only 21 days before the dream was over. Nirvana’s Smells Like Teen Sprit hit the charts and the rest is history. The music scene was changed forever. Sony then did what every other record label did in the change over period and dropped Ana Black like a ton of bricks.

When I got in contact with Dizzy from Ana Black, he told me that they had a bunch of un-released material, probably around 50-60 tracks. I than had him send them to me thinking I would pick through them to get out 1 or 2 CD’s worth of material but there wasn’t a dud track to be heard. I then said to him “stuff it, lets release them all”. Dizzy, being not only one of the nicest rock stars I’ve ever met but also one of the nicest, level headed guys I have ever had the pleasure of meeting describes the music as having the attitude of Motley Crue/Guns ‘N’ Roses with the duel axe attack of Racer X. Not a bad mix if you ask me. I think the fans will really love these releases. I say releases because at this stage we just don’t know exactly how many tracks are in the vault but we are thinking from 4-6 Ana Black CD’s!! Now that’s exciting.

I have never been more excited about the signing a band in Suncity Records’s brief history, I say that with the true belief that Ana Black is the epitome of what the late 80’s, early 90’s sleaze/hard rock was and is all about.

This is pure sleazed up attitude driven hard rock executed to perfection. These guys truly should have been huge!! Ana Black’s first album with Suncity Records will be the “Who Killed Hollywood” album that Sony had ready to go, this should be in every hard rock collector’s collection right next to Dr. Feelgood, Black In Black, Slippery When Wet, Hysteria, etc…

Dizzy and Dave are still heavily locked in the music industry, owning their very own studio out of Los Angeles and currently ripping it up in their new modern rock band, Nero Zero. This time Dizzy has put down the sticks and picked up the guitar and mic. I strongly recommend everyone who likes to dabble in hard rock with a modern twist to check out their My Space site at – www.myspace.com/nerozeromusic

We still haven’t been able to get our hands on a song for you to sample but watch this space in the next couple of days as we have been promised that some have been sent.

Busy is an understatement for us right now as we will be announcing the signings of another 2 stunning bands in a couple of weeks. The next 2 bands to be announced have a more AOR flavor to them, this should keep everybody happy going into the new year.