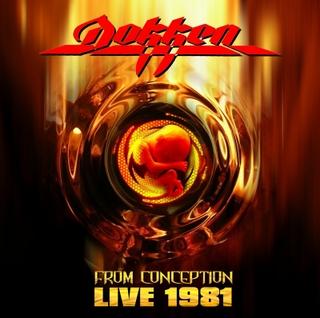 LOS ANGELES — DOKKEN ruled the charts and airwaves in the ’80s with a trio of platinum albums powered by an unforgettable mix of Metal and melody. With the band headed in the studio in January to record their ninth album – “Lighting Strikes Again” due out summer 2007 – Frontiers Records revisits the quartet’s early days with a Live CD from 1981, packed with unreleased material.

“From Conception” finds singer Don Dokken, guitarist George Lynch, drummer Mick Brown and bassist Jeff Pilson ripping through 10 unreleased live performances of several songs that were eventually recorded for the band’s debut album, “Breaking The Chains”, including “Live To Rock (Rock To Live)”, “Knightrider,” the title track, “Paris Is Burning” plus a showcase for Lynch’s formidable guitar heroics. The live disc also contains three previously unreleased tracks that didn’t make it onto the debut album because the label did not feel they were commercial enough at the time: “Goin’ Down,” “Hit And Run” and “You’re a Liar.”

“In 2006 I was asked to remix the original tapes for “Breaking The Chains” for a 25-year anniversary release” says Don Dokken. “So I went to our locker where we had been storing our master tapes for years and while I was there I noticed some old 2-inch tapes that were in faded boxes. When I put them on the machines, I was surprised to hear a few songs that never made it onto our future records”.

“I love the angst in the performance” continues Don, “we were hungry and ready to take on the world. It brought back a lot of memories hearing that show after all these years. I hope our fans will enjoy adding this to their DOKKEN collection–it’s definitely a blast from the past”.

Later this month, DOKKEN will return to their Redondo Beach studio to begin work on their ninth studio album, “Lightning Strikes Again”, their first studio release on Frontiers Records. Taking its title from a track from “Under Lock And Key”, the new album will be available everywhere this summer, featuring founding members Don Dokken and Mick Brown along with Jon Levin on guitars and Barry Sparks on bass.

“From Conception: Live 1981” will be released on March 23rd 2007 on Frontiers Records with a release in Japan on King Records with the following tracklisting: