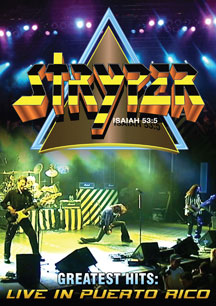 STRYPER’S LIVE IN PUERTO RICO DVD DUE IN APRIL:

Experience the revolutionary multi-platinum artists STRYPER Live in Puerto Rico on March 6, 2004. The band originally formed in Orange County, California by brothers Michael and Robert Sweet and guitarist Oz Fox. STRYPER stands for Salvation Through Redemption Yielding Peace, Encouragement and Righteousness. The Isaiah 53:5 under their logo is the bible verse that states “by His stripes we are healed”. The band earned their stripes on the Los Angeles metal club circuit and in 1984, and went on to sell millions of records worldwide. This DVD features all of their greatest hits and much more!

Song Titles:
Sing Along Song, Makes Me Want To Sing, Calling On You, Free, More Than A Man, Caught In The Middle, You Won’t Be Lonely, Reach Out, Loud And Clear, The Way, Soldiers Under Command, To Hell With The Devil, Honestly, Winter Wonderland