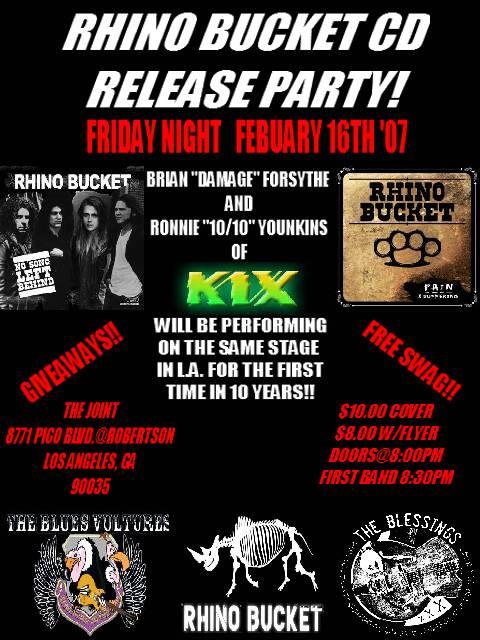 On Febuary 16th, ’07, Rhino Bucket will be throwing a CD release party at The Joint in Los Angeles, CA. The Joint is located at 8771 Pico Blvd. at Robertson in Los Angeles, Ca. The 2 new CD’s, “PAIN & Suffering” and “No Song Left Behind” will be released on Acetate Records.

“Pain & Suffering” is a re-release of the classic CD “PAIN”, which was released in 1994, and will include 5 additional unreleased tracks. This CD was recorded by the line-up of Georg Dolivo, Greg Fields, Reeve Downes, and Simon Wright (AC/DC, DIO) on drums.

“No Song Left Behind” is 15 tracks of unreleased, live, and demo recordings from the original line-up, which included Liam Jason on drums.

Both CD’s will be available through www.rhinobucket.com, www.acetate.com, and on www.itunes.com Febuary 6th, ’07.

Rhino Bucket will be joined on Febuary 16th by The Blues Vultures (featuring Ronnie “10/10” Younkins of KIX), The Blessing, and Smash Fashion. For the first time in over 10 years, 7 year veteran of Rhino Bucket, Brian “Damage” Forsythe will be sharing the same stage with Ronnie “10/10” Younkins in CA. Both Brian and Ronnie were the guitar team of KIX. Who knows what will happen that night…