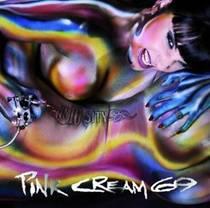 Frontiers Records is pleased to announce all details of the release of the forthcoming PINK CREAM 69 European studio album “In10sity” !

For a number of reasons “In10sity” is a special album in the band’s history. On the one hand it marks the band’s debut for their new label, Frontiers Records. On the other it is the band’s tenth regular studio effort and celebrates it’s 20th anniversary.

“In10sity” was recorded from October 2006 to January 2007 at the famous House Of Music studios near Stuttgart/Germany and once again was produced by Dennis Ward. Besides a truly dynamic and explosive production the album blows the listener away with a blistering set of songs. “Crossfire”, “No Way Out”, “A New Religion”, “Stop The Madness” just to name a few, feature all the classic PINK CREAM 69 trademarks: a focused songwriting style, energetic vocals and a tremendous guitar work.

“Thanks to the addition of Uwe Reitenauer as second guitarist, we have the opportunity to realize many ideas on guitars where we previously used keyboards. The new record is much more guitar-driven than our last productions”, drummer Kosta Zafiriou states. And he is right – “In10sity” is a full blast of stadium hard rock power!

The final tracklisting will include the following songs:
Children of the Dawn; No Way Out; Crossfire; I’m Not Afraid; A New Religion; The Hour of Freedom; Stop This Madness; Desert Land; Out of this World; It’s Just a State of Mind; Wanna Hear You Rock; My Darkest Hour (*); Last Train to Nowhere.(*) Bonus track exclusive to the first pressing in digipak