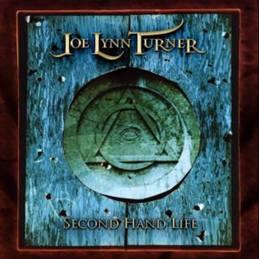 In a career that spans nearly 30 years and includes over 50 album credits, Joe Lynn Turner (“JLT”) remains one of rock and roll’s most distinctive, soulful and expressive vocalists. His credits include FANDANGO, RAINBOW, YNGWIE MALMSTEEN, DEEP PURPLE and more recently MOTHER’S ARMY and his successful cooperation with GLENN HUGHES on the HUGHES / TURNER PROJECT albums.

“Second Hand Life” is Turner’s new studio album, his tenth solo release. This time Joe wanted to go straight back to his melodic rock roots. Therefore, he worked on the songwriting with such luminaries as Jim Peterik (ex SURVIVOR), Bob Held, Karl Cochran, Martin Briley. He also managed to include a track that he co-wrote with Ritchie Blackmore, Jim Peterik and Roger Glover entitled “Stroke of Midnight”.

In Joe’s words: “I would describe the new album as a hybrid between The Usual Suspects and Sunstorm, my recent studio project which received more positive reviews than any of my solo CDs since Rescue You. I felt that the fans wanted to hear more music in this melodic rock vein. So… I think we delivered on this forthcoming album”.

Tracklisting on “Second Hand Life” includes the following songs:
Love is Life; Got Me Where You Want Me; Second Hand Life; In Your Eyes; Blood Red Sky; Stroke of Midnight; Over the Top; Cruel; Sweet Obsession; Love Is On Our Side; Two Lights (European exclusive bonus track)