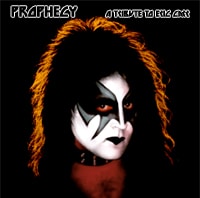 PROPHECY – A Tribute to Eric Carr is a tribute album honoring late KISS drummer, Eric Carr. The album features songs written and performed by singer/songwriter Ralph E. Carle, as well as special appearances by Eric Carr himself. Opening with a rare radio I.D. recorded by Eric Carr, PROPHECY shows a wide range of musical style and instrumentation. In addition, the album includes two different versions of “Your Turn to Cry”, a pre-KISS song written and performed by Eric Carr (with early band The Cellarmen) and also covered by Ralph E Carle. PROPHECY made its debut at the New York City KISS Expo on April 30th, 2000, and has become a widely recognized addition to many KISS collections.

Eric Carr, born Paul Charles Caravello on July 12th, 1950 in Brooklyn, NY, attended the High School of Music and Art, studying cartooning and photography. While attending, he discovered The Beatles and his passion for music. Eric Carr wanted to be Ringo Starr. After playing in a number of bands, a friend convinced him to audition for KISS, who had just announced that they were replacing original drummer, Peter Criss. After sending a press kit and meeting with then KISS manager, Bill Aucoin, Eric Carr successfully auditioned for KISS. Paul Charles Caravello was about to join Gene Simmons, Paul Stanley, and Ace Frehley in KISS, and become known to the world as Eric Carr. For his KISS persona, Carr was first made up as “The Hawk,” which he didn’t like, and later adopted the persona of “The Fox”.

Aside from his legendary drum skills, Eric was also a talented vocalist, and was given the chance to showcase that ability when the KISS classic Beth (originally recorded by Peter Criss) was re-recorded for the 1988 compilation album Smashes, Thrashes & Hits. Eric recorded his version of the song using the same backing tracks as Criss, and reportedly sat on the same drum throne as Criss did to record the song.

Hot In The Shade followed Smashes, Thrashes, & Hits, and included Forever, which reached #8 on the charts in February, 1990. Eric Carr’s last live performance with KISS was November 9, 1990 in New York City, at Madison Square Garden. Work on a new KISS album with producer Bob Ezrin was delayed following Eric Carr being diagnosed with cancer. He died on 24 November, 1991 in New York, at the age of 41.

CLICK HERE to get PROPHECY CD’s and Digital Downloads