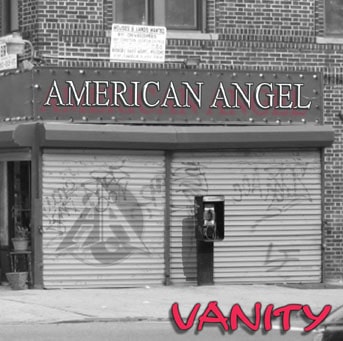 CHAVIS RECORDS reveals the cover art for American Angel – Vanity! The American Angel project has been wrapped up and will be heading to production for a late spring release. Preorders will begin April 1st. All preorders will receive their CD fully autographed by the band.

Track listing: While I’m Away, Pantomind, Vanity, On The Hunt, Seven, Warm Inside, Don’t Wait Up, Breathe, In Perfection, End of the Night, Another Day, Turns to Grey, Permanent Pause

After a 15 year hiatus, American Angel have returned to deliver a staggering release powered by incomparable musicianship, distinctive vocals, and the dynamism of Rocco Fury. Vanity contains 13 tracks of well encompassed hard rock music intertwined with huge hooks, melodies and unforgettable choruses. Vanity’s story delivers a look back at when music was driven by the image but with today’s more modern style.

American Angel rose to fame in 1989, with their self titled debut, after signing with Grudge/BMG. The hit single “How Can I Miss You” was featured on MTV and the video placed into heavy rotation. American Angel has returned with a vengeance; proving once again what music is all about. American Angel, to this day, has a tremendous fan base thus making Vanity a highly anticipated release worldwide. The band will be embarking on a North American tour in support of Vanity this summer.