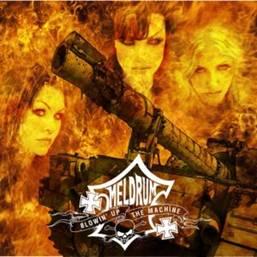 MELDRUM “BLOWIN’ UP THE MACHINE” ON MAY 11TH:

Frontiers Records is pleased to announce the release of MELDRUM’s brand new studio opus entitled “Blowin’ Up The Machine” on May 11th 2007 !

After the release of their debut “Loaded Mental Cannon”, MELDRUM followed up with an intensive touring that culminated in 2005, when the band toured for 3 months with Zakk Wylde’s BLACK LABEL SOCIETY, appearing in sold out venues across the US and Europe, as well as supporting MOTORHEAD in Europe on their 30th anniversary tour. In the fall of 2006 MELDRUM joined again MOTORHEAD as special guests for the fifth time on their German tour.

“Lemmy has been a big influence and a huge supporter of the band” says Michelle Meldrum, “He co-wrote some lyrics and was in the studio recording “Miss me when I’m gone” and just came by and hung out a few times. We admire and love him, he’s awesome!”

“Blowin’ Up The Machine” boasts a shit load of energy, with modern influences mixed with traditional metal sound. Again in Michelle’s words “The new album is more of a band effort and we think the songs are heavier and that the songs represent us better. Our energy that we have live was captured in a stronger way on this cd”.

Experience their full blast attitude and sound and you’ll be convinced MELDRUM is the next big thing in Rock!

“Blowin’ Up The Machine” will include the following cuts:
Purge; Down Your Throat; Scar; Creme De La Creme; Hang Em’; Miss Me When I’m Gone; Another Kind; Exploited; Get Yours; Outta Here; Bite The Pillow.