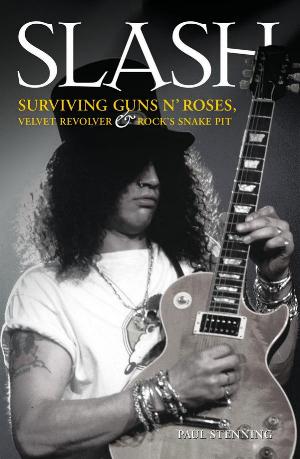 Up for sale are ten Slash Biographies which will be signed and numbered by myself. These are the first pressings and mine are the first to go out. They are priced at 25 pounds each. Please contact me if you wish to purchase one!

A human cartoon of hair, super-strength cigarettes and the rock world’s most famous top hat, Slash is one of the most iconic guitarists in recent memory. Although born in Stoke-on-Trent, this one-off guitarist came to prominence through the debauchery and stellar chart success of the American west coast’s Guns N’ Roses; Slash’s highly productive but volatile relationship with lead singer Axl Rose led to a perhaps inevitable split in the mid-90s.

Moving on first to his own Snakepit project, then a blues band, then on to a career as one of the world’s most sought after soloists, Slash’s profile has finally returned to its highest peak with the formation of the outrageous and hugely successful Velvet Revolver, a super-group of rock stars that lives life as hard as his former band-mates ever did.

His story is inevitably one of massive rock and roll excess, exhausting and famous live shows, fiery confrontations with other musicians but also of incredible discipline, a unique natural musical gift and, of course – through “Sweet Child O’ Mine” and “Paradise City” to name but a few – the creation of some of rock music’s most legendary songs.