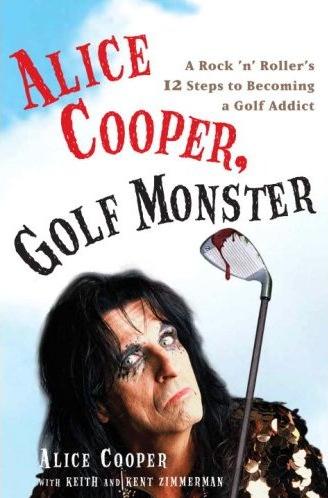 The man who invented shock rock tells the amazing and, yeah, shocking story of how he slayed his thirsty demons–with a golf club. It started one day when Cooper was watching a Star Trek rerun between concerts, bored and drunk on a quart-of-whiskey-a-day habit; a friend dragged the rocker out of his room and suggested a round of golf. Cooper has been a self-confessed golf addict ever since. Today he and his band still tour the world, playing some one hundred gigs a year . . . and three hundred days out of that year, Cooper is on the course.

Alice Cooper, Golf Monster is Cooper’s tell-all memoir; in it he talks candidly about his entire life and career, as well as his struggles with alcohol, how he fell in love with the game of golf, how he dried out at a sanitarium back in the late ’70s, and how he put the last nails in his addiction’s coffin by getting up daily at 7 a.m. to play 36 holes.

Alice has hilarious, touching, and sometimes surprising stories about so many of his friends: Led Zeppelin and the Doors, George Burns and Groucho Marx, golf legends like John Daly and Tiger Woods . . . everyone is here from Dali to Elvis to Arnold Palmer.

This is the story of Cooper’s life, and also a story about golf. He rose from hacker to scratch golfer to serious Pro Am competitor and on to his status today as one of the best celebrity golfers around–all while rising through the rock ‘n’ roll ranks releasing platinum albums and selling out arenas with his legendary act.