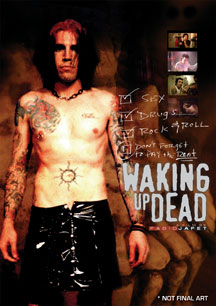 PHIL VARONE IS ‘WAKING UP DEAD’:

Waking Up Dead documents the seedy underworld of the music business through the eyes of Phil Varone of Saigon Kick & Skid Row.

How do you help someone whose life is spiraling out of control? Make a movie, and make him come face to face with his own demons. For a solid four years, Emmy award winning journalist & filmmaker Fabio Jafet, documented the seedy underworld of the music business through the eyes of friend Phil Varone of Saigon Kick & Skid Row fame. Jafet reveals what really goes on behind the scenes in a way never captured before on camera. Waking Up Dead captures the addictions, betrayals and pitfalls on the relentless road to rock stardom.