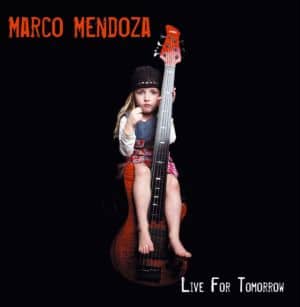 Marco is one of the most respected and well known musicians in the Los Angeles music scene. According to Ted Nugent, “Marco is the world’s greatest bass player and he’s got the soul”. He also played with the likes of Thin Lizzy (with whom he’s been recently touring UK and going to appear live during the summer), Whitesnake, Blue Murder, Ozzy Osbourne and The Cranberries.

Though most often recognized for his jaw-dropping 6-string fretless bass chops, Marco is a master of the 4, 5 and 6-string fretted bass, too. But that’s not enough. In “Live For Tomorrow”, his debut solo album, Marco shows his hidden vocal talent, which just needs to be heard to be believed! Mixing different vocals styles from the bluesy David Coverdale and Paul Rodgers ranges to the Eric Martin-esque overtones, Mendoza shines as a singer that is able to deliver a passionate and strong performance in every song.

“Live For Tomorrow” was mostly written and produced by Marco during the second half of 2006 and the beginning of 2007, together with former Poison and Mr. Big guitarist Richie Kotzen, who also produced the album. Musically the record offers a sincere and down to earth sound, reminiscing of classic Hard Rock (with hints to AC/DC, Mr Big, Damn Yankees etc.) with Blues and Melodic Rock roots.

Some very special guests appear to tribute the talent of this amazing guy. Among them: Ted Nugent, Doug Aldrich (of Whitesnake) and Steve Lukather of TOTO all offer guitar solos appearances, Tommy Aldridge of Whitesnake and Brian Tichy (Pride and Glory, Ozzy Osbourne, Foreigner, and Billy Idol) play drums while Richie Kotzen of course handles the bulk of guitars and duets on vocals with Marco on “I Want You”.

Sit back, light a cigar, relax, put the stereo on and enjoy the ride that this musical master can offer!

“Live For Tomorrow” will include the following cuts:Not For Me; Live For Tomorrow; Lettin’ Go; Look Out For The Boys; I Want You; Your Touch; Let The Sun Shine; You Got Me; In My Face; Broken; Still In Me; Dance With Me

“Live For Tomorrow” will be released on July 6th 2007 in Europe on Frontiers Records with US release on Locomotive and Japanese release on King.