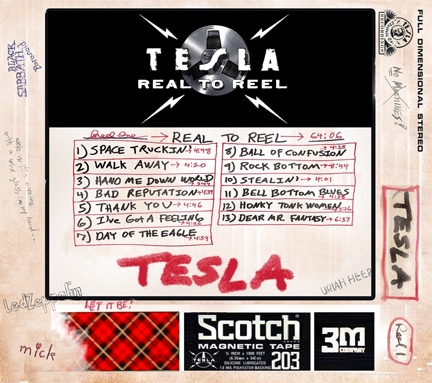 Pre-Order the new CD, Real To Reel by Tesla and get a limited* autographed CD booklet!

TESLA first tested out some of their favorite rock classics with their fans in the summer of 2006 during the “Electric Summer Jam” tour (the first tour with guitarist Dave Rude, who replaced original guitarist Tommy Skeoch). While UFO’s “Rock Bottom” went down like a storm to a standing, cheering, grandstand crowd of 10,000 in Milwaukee, Black Sabbath’s “War Pigs” engaged 6,000 people in Lansing, Michigan so much that they refused to leave during a torrential rainstorm which lasted throughout the entire two-hour show.

After getting such a positive reaction from their fans, the band knew making Real To Reel was a logical next step for them. “Real To Reel is a collection of songs that inspired us back in the day when we first heard them in the ’70s,” says singer Jeff Keith. “We originally had a large list of songs in mind for the record, and we had a lot of fun picking out the ones that ultimately made it onto the album. Making music is all about feeding off of your inspirations and putting your own touches to it. We feel we’ve accomplished this to the highest extent.”

*Offer valid only with purchase of Real To Reel. This special offer is valid for both international and domestic orders. Booklets will be available only while supplies last, www.newburycomics.com will post information when autographed booklets are sold out.