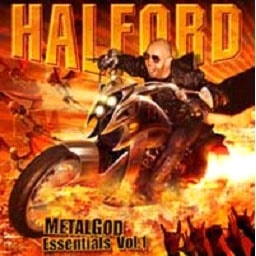 Frontiers Records is pleased to announce the tracklisting of the forthcoming HALFORD best of release “Metal God Essentials – Volume 1” out in Europe on June 8th 2007.

The album includes Halford band’s first new songs in more than four years ‘Forgotten Generation’ and ‘Drop Out’ plus an exclusive Attie Bauw mix for ‘Redemption’ and the 1999 demo version of ‘Silent Screams’.

Full tracklisting is as follows:
Resurrection; Made In Hell; Screaming In The Dark; Golgotha; Silent Screams (1999 Demo); Crystal; Into the Pit; Nailed To The Gun; Slow Down; Locked and Loaded; Forgotten Generation (NEW); Drop Out (NEW); War Of Words; Sun; Trail Of Tears; Redemption (European Mix).

Frontiers Records will also release three (3) new Box Sets during the fall 2007 and in early 2008.

The Box Sets are tentatively titled:

The contents of those exciting packages will be soon revealed!

The new Halford / Frontiers partnership has been greeted with major acclaim in Europe and several magazines including HEAVY in Germany and METAL MANIAC in Italy have already decided to focus their cover stories on the most welcome return on the market of the Metal God. Glowing reviews will also appear on the June and July issues of all Metal magazines, with ROCK HARD Italy who stated: “Metal God Essentials is the best way to learn about the solo career from the british singer, so that the young guys will know who are the real Gods of Metal”.

Rob Halford has also recently stated, in an interview to appear on the forthcoming MRF label magazine: “I now operate my global label and production company, Metal God Entertainment and I licence my music and films to digital music companies and deliver it direct via www.HalfordMusic.com. Frontiers has displayed to my company as a supportive European label with an established retail and product distribution network. Frontiers will be a wonderful team to work and grow with and I look forward to good times together”.

Frontiers Records President, Serafino Perugino said: “Rob Halford signing is a pivotal choice for the label’s operations. We deem this new partnership with the outmost respect and enthusiasm and we look forward to establish firmly Halford’s legendary position of Heavy Metal God within the European markets”.