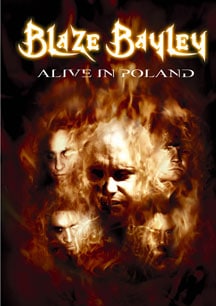 A veritable treat for fans of melodic heavy-metal: legendary Blaze Bayley (ex-Wolfsbane, ex Iron Maiden) on his first live DVD! Recorded during the 21st edition of the Metalmania Festival in Katowice (Poland), the footage documents a fantastic 1 1/2+ hour show during which he presented the best tracks taken from Blaze’s discography as well as selected tracks of his previous band – Iron Maiden (‘Man on the Edge’, ‘Futureal’). Bayley was Iron Maiden’s lead singer for five years. During that period he recorded two albums, the ‘X-Factor’ (1995) and ‘Virtual XI’ (1998). In addition to the performance, the DVD also includes 3 interviews, footage recorded during Blaze’s visit to Poland.