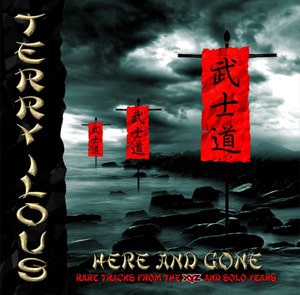 Here And Gone is a compilation of rare tracks recorded for my solo projects or with XYZ. I was fortunate enough to record these tracks with some exceptional players, engineers, and producers throughout the years. Several of these tracks were originally recorded long ago for CD releases that never saw the light of the day, while others, recorded more recently as soundtracks for movies and TV.

The translation behind the Japanese writing on the CD is “BUSHIDO”, meaning “The way of the Samurai”. I chose this to represent my musical path so far, which has been a tough road filled with many challenges, sacrifices, and its share of disappointments and sadness, yet so full of joy. Truly, an unbelievable journey that took one outcast foreigner all the way to Hollywood for the real American Rock and Roll Dream!

I just wanted to share some of those moments in time with my friends and fans from all over the world, that I have been lucky enough to touch and connect with in some way through my music.