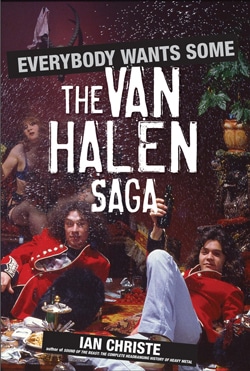 Better finish the books on your summer reading list by the end of August. That’s when Everybody Wants Some: The Van Halen Saga (Wiley Publishing) hits bookstore shelves. Written by noted metal journalist and radio host Ian Christe, the book recounts the life and times of the L.A. group that rose to hard rock dominance in the late Seventies.

The book begins with an account of Van Halen’s explosive arrival on the California hard rock scene in 1978, revealing the powers of lead singer David Lee Roth, wunderkind guitarist Eddie Van Halen, good-natured bassist Michael Anthony and complex drummer Alex Van Halen. The story follows the band’s development and success, through Sammy Hagar’s replacement of Roth in 1985, and his own replacement by former-Extreme singer Gary Cherone in the late Nineties.

In addition to the band’s history, the book recounts the discord between Eddie and his frontmen, his drinking, his relationship with Bertinelli, and the secrets behind his guitars.

Christe is the author of Sound of the Beast: The Complete Headbanging Story of Heavy Metal and host of the popular Bloody Roots program on Sirius satellite radio’s Hard Attack station.

Everybody Wants Some will be released August 31. The 320-page hardcover book includes a 16-page color photo insert and will sell in the U.S. for $25.95. To pre-order, visit wiley.com or amazon.com.