When Ratt crawled triumphantly out of Los Angeles’ Sunset Strip club scene in the early 1980s and instantly became an iconic presence in the era-defining hard rock juggernaut that they helped invent, their look proved as potent as their sound. Now, for the first time ever on DVD, Rhino presents all of Ratt’s Atlantic years videos in one essential collection. Included are the clips that became MTV staples plus bonus features, live highlights, rarities and more.

Beginning with their their triple-platinum debut LP Out Of The Cellar, Ratt prevailed as one of the ’80s most popular bands, on radio and on MTV. All the hits and favorites from the previous VHS releases Video (’85) and Detonator (’91) are featured on this new DVD, spotlighting the classic Ratt line-up of lead vocalist Stephen Pearcy, guitarists Robbin Crosby and Warren DeMartini, bassist Juan Croucier, and drummer Bobby Blotzer.

Highlights include “Round And Round,” “Back For More” (both featuring Milton Berle), “Lovin’ You’s A Dirty Job,” “Lay It Down,” “Way Cool Jr.” and other signature songs. Four additional clips – “You’re In Love,” “Dance,” “Body Talk” and “Slip Of The Lip” – are previously unreleased on either DVD or VHS.

Bonus features include concert highlights filmed in Japan and exclusive new commentary with Pearcy, DeMartini and Blotzer. This must-have DVD debut of Ratt’s videos coincides with the release of Rhino’s new CD compilation Tell The World: The Very Best Of Ratt.

From the clubs of the Sunset Strip to world domination, hard rock hit-makers Ratt were one of the most popular acts of the ’80s. With the reunited band – featuring original members Stephen Pearcy, Warren DeMartini and Bobby Blotzer – together and touring, Rhino celebrates Ratt’s legacy with the most comprehensive single disc anthology of their hits and favorites ever compiled.

The career-spanning disc boasts twenty tracks from all seven of the band’s albums, including their quartet of consecutive platinum LPs from the mid-’80s: Out Of The Cellar, Invasion Of Your Privacy, Dancin’ Undercover and Reach For The Sky. Stand-outs include the signature Ratt anthems “Round And Round,” “Back For More,” “Wanted Man,” “Lay It Down” and “Way Cool Jr.”

Featured highlights also include a previously unissued song from the 1988 Reach For The Sky sessions in addition to cuts from their sole album for Sony-Portrait, 1999’s Ratt, and from the group’s independently released Collage. 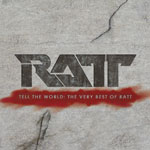