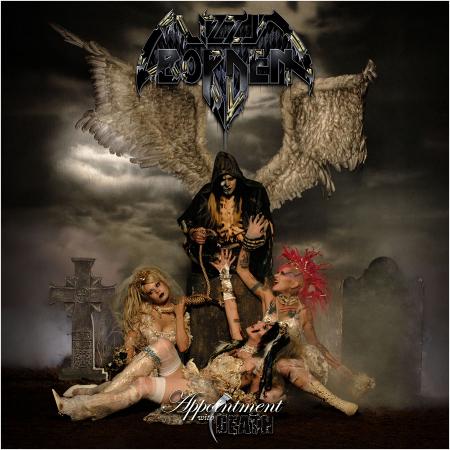 In a career spanning almost 25 years, Lizzy Borden was created in 1983 in Hollywood California. Spitting venom, stage blood and dripping grease paint while breathing life into bizarre characters bred precisely for the stage. Theme oriented creations such as, Love you to pieces (1985) Menace to society (1986) Visual Lies (1987) Master of Disguise (1989) Best Of (1994) and Deal with the Devil (2000) forever cemented icon status to the master showman from the dawn of heavy metal.

Now, Years in the making, Lizzy Borden pulls back the cloak to unveil his latest and most frightening creation, Appointment with Death (2007) a fatalistic journey to the final destination damned by the wings of death.

Appointment with Death was produced by L. Borden and J. Scott It was recorded at the Zanzibar studios in N. Hollywood CA. And was mixed by Erik Rutan (Hate Eternal/ex-Morbid Angel) at Mana sound in Florida

Like all past Lizzy Borden recordings, Appointment with Death is a conceptual piece; this concept is centered around the theme of, as the title implies, Death.

“Oddly enough, writing eleven songs about death was no easy task for me; lyrically being graphic or grotesque would have been too easy, and being overly morbid would bring nothing new to the concept. I wrote this just like I have all of the other LB recordings, as a play or a movie. There is a beginning, middle and an end with the lead character taking us on a journey. Death is all around us, lurking, waiting to pounce, striking fear and antagonizing the living in many different ways, I tried to explore some of those ways in the most poetic way that I know how” commented Lizzy.

The music on AWD was composed by Lizzy, Ira Black, Marten Andersson and Joey Scott

AWD is epic, Heavy, dark and melodic, everything a traditional Lizzy Borden recording should be and more. With new guitarist Ira Black along with Marten Andersson on Bass and co/founder Joey Scott on the drums, the Lizzy Borden sound has evolved into a multi-dimensional ever-lasting-gobstopper working just as well in an ipod as it has always done on stage.

“These musicians are more then just special guests, they all, each in their own original way helped to create this work of fiction and bring Appointment with Death to life.” Lizzy

(All who performed on AWD)

For the Cover, Lizzy Borden worked with special effects wizard and make-up artist Ralis Kahn. Ralis designed the set and the look of the band based on the theme for Appointment with Death. The cover depicts Lizzy as the angel of Death in the action of collecting 3 souls who have ended their lives in 3 very different ways by their own hands. Famed ‘Metal’ photographer Alex Solca took well over a 1,000 shots in a two-day marathon, involving extras as well as the band (Lizzy, Joey Scott, Marten Andersson and Ira Black). At the end of the two-day shoot the set was literally set a blaze! With flames shooting 30 feet into the air!

Lizzy explains “Because a lot of music is going straight to itunes, we thought we would pay special attention to both the cover and the back cover and fill the inside of the CD booklet with tons of fun shots from this specialized photo shoot. As we all know, very soon there will no longer be an actual CD to have a cool booklet for. Everything will go straight from the studio to your ipod, so we thought we would really go all out on this one”

The new show for the Appointment with Death Tour is based around the theme of the new release; with Lizzy playing the lead character (Death). Lizzy and Co. will bring to life the characters and imagery from the album to the stage with special effects master Ralis Kahn at the helm. Ralis is working with the band designing an extraordinary over the top stage show created especially for the AWD tour. Showcasing songs from the new release as well as all the Borden fan favorites, the upcoming tour promises to be the show you don’t want to miss.

Tour Dates to be announced soon.

Make your Appointment with death for October 2nd available everywhere on Metalblade records.

The title track ‘Appointment with Death’ is now available for streaming at these locations:
myspace.com/lizzybordenband
www.lizzyborden.com
www.metalblade.com/

Track list:
Abnormal
Appointment with Death
Live forever
Bloody Tears
The Death of Love
Tomorrow never comes
Under your Skin
Perfect World (I don’t wanna live)
Somthin’s crawlin
(We are) the only ones
The Darker side