Good news for fans of former Metallica bassist Jason Newsted‘s band Newsted that operated from 2012 to 2014. In an interview with Billboard, Newsted commented on why his band bearing his last name essentially disappeared: “I was trying to take on too much stuff at once. You can only do so much and make it work right,… I won’t call it over ’cause I did write a whole ‘nother record, but it just hasn’t been put together. It hasn’t been recorded all the way. It’s not ready for the people. That’s something that’s just on the back burner right now.”

Sleaze Roxx stated the following in its review of Newsted‘s full-length album: “Two CDs in the span of eight months! I wish that every band was back to the glory days of coming up with an album of new material every six months to one year! That being said, although Newsted came out with their debut EP Metal in early 2013, followed by the full-length Heavy Metal Music in early August, there are two songs from the EP featured here: “Soldierhead” and “King Of The Underdogs”. In addition, two of the three deluxe edition tracks on Heavy Metal Music are the remaining tracks from Metal. Therefore, Newsted has not really come up with two CDs of new material — but I am happy to have both albums released in the same year in any case.”

Sleaze Roxx continued its review of Heavy Metal Music by stating: “The one common theme with all of the songs is the heaviness that exudes from all of them. Newsted has definitely found their sound and Jason Newsted‘s rough sounding lead vocals fit quite nicely with the band’s sound.” 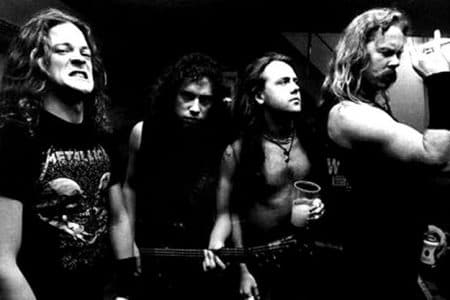 In his interview with Billboard, Newsted also reflected on Metallica‘s landmark self-titled album (also known as The Black Album) that was released 25 years ago to this day. Excerpts from the Billboard article/interview are as follows:

Metallica was Newsted‘s second album with the band after joining in 1986 to replace the late Cliff Burton, and it was, of course, the group’s worldwide breakthrough, selling more than 16 million copies in the U.S. alone. Newsted‘s main memory of making the album, meanwhile, was of a band taking on new creative challenges in the studio with an album that was considerably more direct and focused than its more long-winded, virtuosic predecessor …And Justice for All.

“Everybody had built themselves up through hard knocks and scars and so forth to be ready for what was coming, to create this thing that was bigger than all of us and greater than any of us,” Newsted recalls. “That includes all the people that worked with us, like the label and QPrime [management] and [producer Bob Rock]. [Rock] came in and he whipped us into shape about tonality of things and power of things and actual sound quality. We were ready for him, he was ready for us, the world was ready for the sound. We didn’t sit down and say, ‘It’s gonna be like this,’ no, but I think we pulled in somebody who could control us for a second, harness us for a second, and everybody put their nose to the stone and worked hard, like Metallica always did, and the floodgates just opened and we got the fruits from it. I’m really proud of what we did.”

You can read the rest of the article/interview at Billboard.

Sleaze Roxx stated the following in one of its reviews of Metallica‘s The Black Album: “Overall, The Black Album is a landmark album which is always enjoyable to listen to. That being said, I wouldn’t want to hear Metallica play the whole album in its entirety in a live setting as I would much rather like the heavy metal giants to perform one of their first three albums in their entirety. Is The Black Album the start of Metallica losing their way? Yes but you can’t expect a group that changes its sound and style quite a bit from album to album to not come up with a few duds (i.e. St. Anger) here and there. That being said, The Black Album is definitely not a dud and what I would categorize simply as a “solid” but not spectacular album from Metallica.”