Quiet Riot drummer and band leader Frankie Banali was recently interviewed by Jimmy Kay of Canada’s The Metal Voice and spoke about the status of the group’s follow up album to Road Rage, which was released in 2017.

Banali advised: “All the drums, bass and guitar tracks are done. About half of the vocals are done so it’s a matter of finishing the other half of the lead and background vocals. Then the the mixing process will start. We’re still working on on the art and on all those components so I think best-case scenario fall 2019, or worst-case scenario early next year. From my perspective, it is the 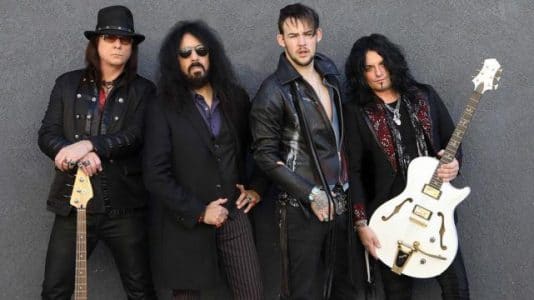 most varied Quiet Riot record I have ever have ever worked on. It’s  gonna cover a lot of bases, I think is going to surprise a lot of people and I hope it’ll be a pleasant surprise, it’s the most varied record.  My first consideration when I’m writing something and when I write together with my writing partner Neil Citron is what would Kevin Dubrow like this? The greatest thing about Kevin is he was so open-minded and he had such a broad taste in music that there were there were very few things that he didn’t like.”

Sleaze Roxx stated the following in its review of Road Rage:

“Road Rage is a new album by a veteran band with a new singer who is half the age of its two long-standing members in Chuck Wright and Frankie Banali. He’s younger than Alex Grossi as well though I will say I have no clue how old Grossi is… I just know I like a whole lot of the things he’s been involved in! I think the fact that it is a veteran band with a young singer describes the sound. You have elements of classic Quiet Riot with a vocalist who brings you more of a new generation of melodic hard rock. It is very much ’70s hard rock mixed with 21st century bands like Hinder. And, it works… Mostly….

The positives of the album are a large number of well written songs with great musicianship by the great Frankie Banali who still bangs on that drum like it is 1983, Chuck Wright who plays bass incredibly well and deserves more credit, and Alex Grossi who is a diamond in the rough… Vocally, James Durbin delivers a performance like he should have on his original debut album, which felt put on and forced. Suits made that record, except for a few exceptions, and that is why it flopped with an audience that was ready to embrace it. On Road Rage, Durbin IS Durbin. And, that is all his fans ever wanted….

The negatives? Production! I mean, that is such a problem here. You have a band — on the same label — called Crazy Lixx who release a slick album that is as strongly produced and rivals the sound quality of Def Leppard. This sounds a lot more raw than that. Even albums like 1993’s Terrified, which may or may not have been released in the US at the time given the musical climate, had sharper production than Road Rage. There are some good songs on that album but Road Rage has much more rich content.”

You can read other excerpts from the interview with Frankie Banali at The Metal Voice‘s website or listen to the interview below: