TMZ has provided video footage of Mötley Crüe frontman Vince Neil and actor Nicolas Cage getting into what appears to be an altercation allegedly one day ago on April 7, 2016. 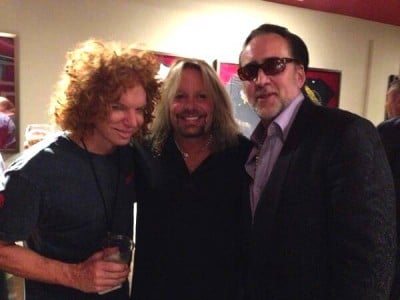 TMZ reported the incident as follows:

“Vince Neil and Nic Cage got in a huge physical fight in Las Vegas Thursday, after Vince allegedly attacked a woman in a hotel … and Vince is now the subject of a criminal investigation.

Law enforcement sources tell us the fight went down at around 5 PM at Aria Hotel on the Vegas strip. We’re told Nic and Vince were inside when a woman came up to Nic and asked for an autograph. Our sources say Vince allegedly got behind the woman, grabbed her by the hair and pulled her to the ground.

The video we got shows the end of a fight between Vince and Nic. Our sources tell us Nic was trying to restrain Vince and calm him down, taking him outside the hotel and into a car. Nic is screaming at Vince, imploring him to calm down.

Cops tell us Vince was cited for battery and never taken to the station.”

Based on the video and TMZ’s reporting, it appears that Cage simply tried to calm and restrain his apparent friend Neil from acting any further rather than get into an actual altercation or fight with him.