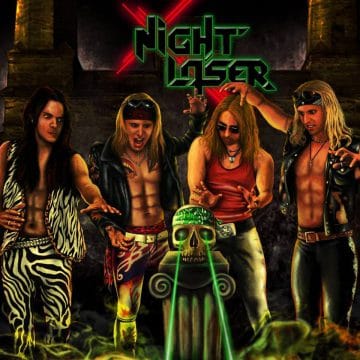 In terms of how Night Laser hooked up with Helloween guitarist and Gamma Ray frontman Kai Hansen who ended up making a guest appearance on the album’s title track, Hankers advised: “We met Kai when we recorded “Laserhead” at the Chameleon Studios in Hamburg. At the same time, he was doing some recordings for his album “Hansen and friends” there (awesome CD btw). We got into talking, shared a few drinks and eventually became really good friends with him. So from time to time he would pop up in the studio and have a listen to our music. He really liked it, so we just asked if he would like to chip in some vocals. When he agreed, it felt like we had been knighted

😀but not only did he add some nice vocals to the song, he also appears in the video clip to “Laserhead”, which we recorded at the university of Hamburg and had great fun shooting with him and many other friends.”

With respect to when the next Night Laser studio album will be released, Hankers stated: “We are always in the creative process of writing and recording new music. But with all the touring going on, I guess it’s safe to say that we won’t release a new record this year. Of course we’d love to present our new material rather today than tomorrow, but there’s only so much time…maybe in 2019?”

You can read the rest of the interview with Hankers at The New Wave of Hair Metal‘s Facebook page.