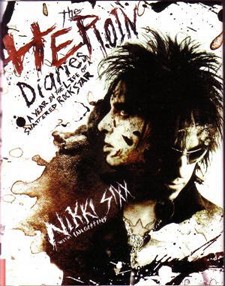 Tony Marrero of the St. Petersburg Times reports: Nikki Sixx, the former bassist for the heavy metal band Motley Crue, wrote The Heroin Diaries as a cautionary tale about the dangers of drug use.

In the memoir published in 2007, Sixx — who was born Frank Feranna — includes diary entries from drug-addled days in 1987 accompanied by his reflections as a now-sober family man.

Hernando High School teacher Jason Galitsky thought the book, which is subtitled A Year in the Life of a Shattered Rock Star, would be an effective, though optional, supplement to his Advanced Placement psychology course.

Now Galitsky is himself a cautionary tale about the potential pitfalls of suggested reading lists. The 31-year-old teacher has been given a letter of reprimand by superintendent Bryan Blavatt for including the book on a suggested list without approval from school administrators.

Galitsky also was reprimanded for writing what district officials determined to be an inappropriate message in a female student’s yearbook, according to an investigation report released Monday.

“Regardless of the circumstances, it is your responsibility to protect students from conditions that may be harmful to their mental and/or physical well-being and/or safety and to protect them from embarrassment,” Blavatt wrote in the letter. He did not return a call seeking comment Monday.

Last month, the father of the female student came to Hernando High administrators to complain about the explicit language, descriptions of drug use and photos in the The Heroin Diaries. The book, published in 2007, was inappropriate for high school students, the father said. Galitsky, in signing the student’s yearbook last year, had recommended she read the book over the summer for the class this year.

Hernando High principal Ken Pritz agreed with the parent and required Galitsky to pull the title from the suggested reading list posted on a personal Web page designed for the class. School officials also told Galitsky that the Web page, which linked from a district online portal, violated policy.

During an Aug. 27 predetermination hearing, Galitsky defended the book as appropriate for high school students in a college-level course. He also said he was unaware that suggested material for Advanced Placement courses required approval from the School Board, according to summary notes from the hearing.

Galitsky told officials he read the The Heroin Diaries after some students mentioned it in one of his classes last year, but he decided not to make the book required reading because of the explicit language. He noted that he found his copy of the book in the social sciences section of a chain bookstore and that the book also can be found in the Hernando County Public Library.

But Galitsky also acknowledged that, “In retrospect, maybe it wasn’t the best suggestion.”

“I believed my students would be more interested in a first-hand account of an individual suffering from addictions to mind-altering substances than they would a fictitious account of the same material,” Galitsky wrote in a reply to the reprimand letter. “The intent of the author was not to offend and disgust his readers, but to share the story of his personal battle with his demons.”

School officials asked why Galitsky referred to the student in the yearbook salutation as “Tubby” and “Pork Chop.” Galitsky said the student, a vegetarian whom he described as “far from tubby,” gave herself that nickname in jest and even put the names on tests and quizzes.

Galitsky must complete an ethics training course by Dec. 1. He also cannot serve as a teacher mentor for this school year. The supplemental position pays $175 per mentored student, per semester.

Galitsky was hired in 2004 as an in-school suspension teacher at Springstead High and moved to Hernando High the following year. His evaluations through the 2007-08 school year — the most recent year available under public records law — are positive. His disciplinary record is unblemished.

“This was a teacher that was trying to make sure the kids get the best of information,” Vitalo said. “He just wants to focus on teaching in the classroom and move on.”

Vitalo said the district handled the matter appropriately but points to the need for more specific language in the staff handbook on suggested reading. Galitsky, in his response letter, said he wanted to help in that effort.

“I will be working proactively with my administration at Hernando High School as a teacher advocate to help define this otherwise ambiguous policy to ensure that none of my colleagues are drawn into a situation similar to mine,” he wrote.

Courtesy of www.sleazeroxx.com and www.tampabay.com