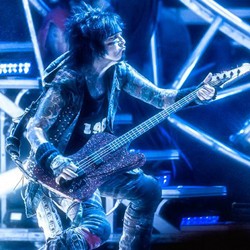 “Back in my country, my president is trying to pass a gun ban so he’s staging all of these murders,” the drug-addled Mustaine told the Singapore crowd. “Like the ‘Fast and Furious’ thing down at the border. And Aurora, Colorado, all the people that were killed there. And now, the beautiful people at the Sikh temple. I don’t know where I’m going to live if America keeps going the way it’s going because it looks like it’s turning into Nazi America.”

Now Nikki Sixx has fired back by stating, “Dave Mustaine is fucking asshole. I can’t even imagine how deep this cuts the victims families of these shootings. He owes every family an apology as well as our great country. Hey Dave, if you think America is turning into “Nazi America” as you are quoted saying… Then move the fuck out…”

Mustaine did try to clarify his Singapore comments in a recent interview by saying, “In the heat of the moment, when you’re onstage and you’re talking, sometimes you’re not as eloquent as you’d like to be… We really need to investigate this. I love our country and my whole thing with this is that I think we should just look into it… I just think that we deserve to know the truth — that’s it.”

“I’m a patriot,” Mustaine continued unapologetically. “I’ve always been controversial. I’m a political songwriter. And this wasn’t done to hurt any our my fellow countrymen. I think that it’s something that we really, really need to look into.”