Following the lead from his Mötley Crüe bandmate Tommy Lee, it is now the turn of bassist Nikki Sixx to accuse KISS of copying his band’s stage set from for its All Bad Things must come to an End tour, which ended back at the end of 2015.

Sixx posted the following message on his Instagram page:

“If ya wanna see an exact reenactment of this just go to the #LosAngeles Forum tonight.”

Sleaze Roxx noted as follows in its concert review of Mötley Crüe‘s opening night at the Van Andel Arena in Grand Rapids, Michigan, USA on July 2, 2014:

“Mötley Crüe‘s set started with so many lights, pyro, and explosions that in the first thirty seconds I could not even tell what song that the band was playing — the muffled sound did not help. By the time that the chorus came, I knew that I was hearing “Mutherfucker Of The Year”, which is not one of the best songs by any means from ‘Saints Of Los Angeles’ and accordingly, one weak opener. Mötley Crüe‘s stage set was somewhat puzzling with its “connect four” backdrop. I did not see any big screen TVs, meaning that if you had one of the “cheap seats” — and there really wasn’t any from a price perspective — the band members would look miniscule the entire night. However, upon viewing a few YouTube videos after the concert, I noticed that there was indeed one big screen all the way at the top over the stage lights. The whole show looked cloudy for most of the night due to all the smoke and lights emanating from the stage.

The concert definitely picked up when Mötley Crüe launched into their second song “Wild Side”, which would have been a much better opening song. “Primal Scream” was interesting in that, for one of the first times, I thought that a stage show overshadowed a song. Every time the word “Primal” was sang, huge balls of fire shot into the air, while every time that the word “Scream” was sang, huge puffs of smoke would come billowing out. Oddly, after “Primal Scream”, guitarist Mick Mars came out to play a less than memorable solo. A guitar solo? After the third song? Why? The solo was pretty poor and ended with Mars simply playing some basic riffs. Eventually it became apparent that the band was experiencing some technical difficulties as frontman Vince Neil explained that there was a hole in drummer Tommy Lee‘s bass or kick drum. Mars had likely been sent out to pass some time, and that would explain the “quality” of his guitar solo. Once Mars was finished, Neil indicated that the band would be back in three minutes — but another ten minutes passed by with nothing happening. What a momentum killer.

Eventually Mötley Crüe were back and tried to recapture their momentum with some good versions of “Same Ol’ Situation” and “Looks That Kill”, along with a meek version of the oldie “On With The Show”. The unthinkable then happened when Mars completely screwed up the intro to “Too Fast For Love”. Perhaps his bandmates were frustrated with him because Lee, or was it bassist Nikki Sixx, threw him under the bus by declaring to the crowd something along the lines of, “Mick does not remember how to play the song — the song is only 35 years old”. Ouch — that hurts. It was somewhat obvious when listening that Mars was off, but now it was public knowledge. This then led into an approximately 20 minute break where the house lights — yes, the house lights — were turned back on. Another huge momentum killer. I would have thought that a veteran band such as Mötley Crüe would have weathered the off-time by entertaining the crowd, but apparently not. This would have been an opportune time for the very charismatic Tommy Lee to go out and shoot the shit with the audience, but instead fans had to wait with the show interrupted for quite a long time.

You would have thought that Mötley Crüe would then try to get the crowd going right away with a big hit. Instead, they decided to do the world premiere of their new song “All Good Things Must Come To An End” — or whatever it is called. The band could not even get that one right, as Mars screwed up the intro of that one as well! The band should have soldiered on even with Mars‘ misstep since, presumably, few in the audience knew how the song went — but perhaps the guitarist was so off course that his bandmates could not recover. Whatever the case, it became quite obvious that Mars was having a terrible night and could have used quite a few more rehearsal sessions before embarking on this tour. Technical difficulties are one thing, not being able to play your own songs is another.” 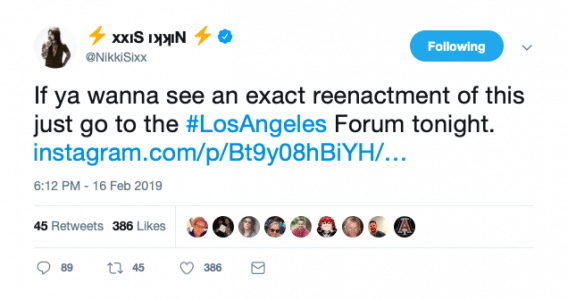