Mötley Crüe leader and bassist Nikki Sixx is apparently enjoying his life without alcohol as he recently tweeted not being to imagine his life if he still was a “practicing alcoholic.”

“I can’t imagine my life if I was still a practicing alcoholic..Its a guaranteed death sentence or a life of spiritual, financial and emotional bankruptcy…Rock n Roll doesn’t need to be shrouded in addiction.We know better now…”

In a recent interview with RollingStone, Sixx spoke about the pitfalls of drug addiction. In terms of the drug heroin, Sixx indicated: “When I was first introduced to heroin, it was like, “Oh, these writers, songwriters and painters do that.” I was young and naïve. I didn’t realize the demon it was.”

In regard to what he learned during that period in his life, Sixx opined: “I learned that drugs are like Band-Aids and that Band-Aids don’t work. You’ve got to clean out the wound. I had to struggle with that through the fame and success. In certain parts of my life, I could have made better decisions. I feel bad for the people in my family that I scared. And I regret that when the band finally got what we wanted, we were self-destructing.”

You can read the rest of the interview with Sixx at RollingStone‘s website. 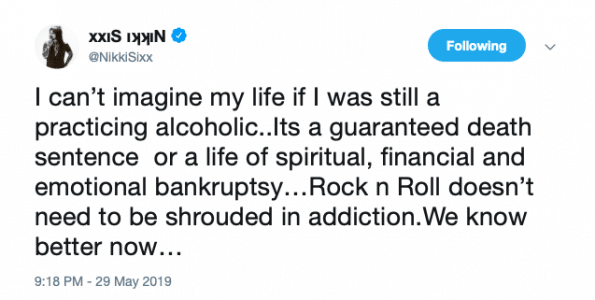