A number of articles were released yesterday by online publications including Blabbermouth, Sleaze Roxx and Metal Sludge based on an interview down by former Ozzy Osbourne and Badlands guitarist Jake E. Lee‘s interview with Tone-

Talk. During the interview, Lee advised that Mötley Crüe bassist Nikki Sixx and drummer Tommy Lee wanted him to replace guitarist Mick Mars before he eventually got the gig with Ozzy Osbourne in 1983. Lee also revealed that the story about Ozzy Osbourne snorting a number of ants in The Dirt movie was not true since he only ended up snorting a small spider instead. Finally, Lee advised that when Mötley Crüe were opening for Ozzy back in 1984, there was an incident when Mars called him a ‘slant-eyed Japanese bastard.’

Sixx tweeted the following message about an hour ago:

“Isn’t it funny how the has been’s,never was’s, washed up long ago small career people all started coming outta the woodwork around the movie? I guess it’s their only way to get attention in 2019. God bless them. They must be desperate.”

While Sixx did not refer to anyone in particular, some people that have replied to his tweet have assumed that he is referring to Jake E. Lee. 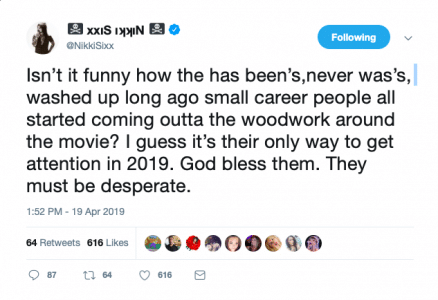