Mötley Crüe and Sixx:A.M. bassist Nikki Sixx was recently interviewed by Australia’s Music Feeds and surprisingly did not have good things to say about one of the most popular acts keeping the ’80s torch of music alive.

Sixx was specifically asked what he thought of Steel Panther to which he replied: “You know, it’s not my thing. That’s just me personally. I don’t know. It doesn’t feel… I guess a lot of people think it’s funny and they’re kind of a joke band and that’s cool. But that’s not my cup of tea. I kind of take my music a little more seriously.”

You can read the rest of the interview at Music Feeds.

This statement comes from the man whose Mötley Crüe band recorded a cover of the Brownsville Station‘s “Smokin’ In The Boys Room” for their Theatre Of Pain album in 1985 and also released a rather comical video for it. 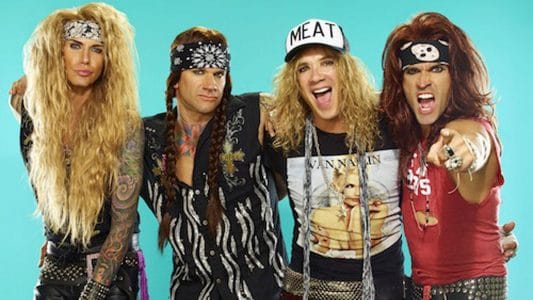 . Finally, Steel Panther‘s last studio album All You Can Eat landed the #7 position on the Sleaze Roxx Readers’ Top 20 Albums of 2014 and the #2 spot on Sleaze Roxx’s Top Ten Albums of 2014.

With respect to the latter, Sleaze Roxx stated: “Steel Panther may best be known for making a parody of heavy metal in the 80s with all of their jokes and sexual innuendos but the reality is that what most likely keeps them doing so well is their melody hooked filled music and their over the top lyrics. Steel Panther‘s studio record #3 All You Can Eat is no exception and sees the glam metal rockers continuing in the same vein as with 2009’s Feel The Steel and 2011’s Balls Out. It is therefore no surprise that Steel Panther have recorded their third top 10 finish in Sleaze Roxx’s year end tally and All You Can Eat is the band’s best charting effort in that regard!”

Mötley Crüe‘s last studio album Saints Of Los Angeles dates back to 2008 and finished #1 on the Sleaze Roxx’s Top 20 Albums of 2008.