Mötley Crüe bassist Nikki Sixx recently posted on Twitter to express his opinion on the band’s new songs that are in the works.

The following message was posted in part on Sixx‘s Twitter page on October 12, 2018:

“Fück can I just say it? I’m listening to the roughs of the new @MotleyCrue and it feels real and raw.Everybody is playing like mad and the songs crush. Bob Rock brought the sounds. Plus we have a surprise that will confirm that we’re outta our minds.”

Back at the end of August 2018, photos surfaced of Sixx and drummer Tommy Lee in a studio with past Mötley Crüe producer Bob Rock (Dr. Feelgood in 1989, new material on Decade Of Decadence in 1991, Mötley Crüe in 1994, new material on Greatest Hits in 1998 and new material on Red, White & Crüe in 2005). The next month, Mötley Crüe lead vocalist Vince Neil confirmed that the band was working on four new songs.

It strongly appears that the band is working on the new songs to either accompany the movie soundtrack for their autobiography The Dirt or for some new greatest hits compilation.

Motley Crue – If I Die Tomorrow 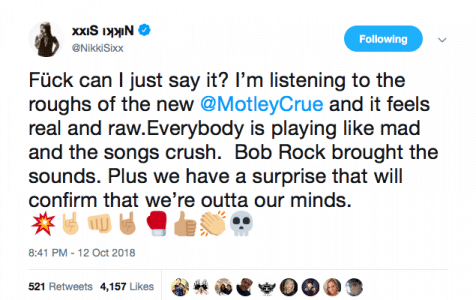