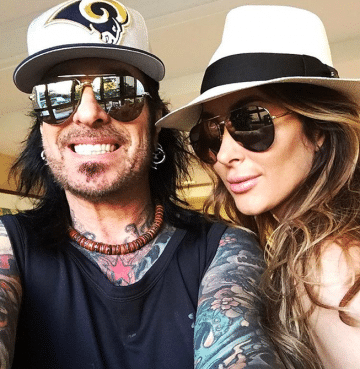 “In 1987, Denise “Vanity” Matthews claimed that she was engaged to Sixx. In his book The Heroin Diaries: A Year in the Life of a Shattered Rock Star, he describes his relationship with her, “Vanity came and went during different periods of my addiction. She was a wild black chick who had sung with Prince: she’d also been his lover for a while. At the time I thought of Vanity as a disposable human being, like a used needle. Once its purpose was fulfilled, it was ready for the trash, only to be dug up if you were really desperate…We became drug buddies: sometimes, you could even just about call us boyfriend and girlfriend. Vanity also taught me how to really freebase: the first time I based was with Tommy when Mötley just started and only a few times after that. So up until then, I’d been mostly snorting or injecting. But as soon as she showed me the real ins and outs of cooking up a good rock…it was love. Not her. The drug.”

One month after the divorce from Brandt, Sixx married his second wife, another Playboy Playmate, actress Donna D’Errico. Sixx and D’Errico have one daughter, Frankie-Jean Mary Sixx (born January 2, 2001). D’Errico has a son, Rhyan Jacob (born 1993), from a previous relationship. They separated shortly after their daughter’s birth, and reconciled months later when Sixx completed rehab. They separated again on April 27, 2006 and divorced in June 2007, with D’Errico claiming irreconcilable differences.

Sixx dated tattoo artist Kat Von D from 2008 to 2010. A few months after their breakup, Sixx and Von D were spotted back together. Sixx was featured on an episode of Von D‘s reality television show LA Ink in 2008, in which Von D gave him a tattoo of Mick Mars, lead guitarist of Mötley Crüe. On August 25, 2010, Sixx issued a statement that their relationship had dissolved. It was reported on October 19, 2010 that Nikki and Kat had gotten back together. On October 27, 2010, Kat Von D confirmed to USA Today that indeed she and West Coast Choppers owner Jesse James were still together, debunking original reports that she and Sixx had reconciled. On November 4, 2010, Sixx was spotted at the Call of Duty: Black Ops Launch Party in Santa Monica, California with Courtney Bingham, whom he has been dating ever since and they now live together. On November 26, 2012, Nikki revealed to the public that he proposed to Courtney while vacationing in St. Barts. They were married on March 15, 2014. Courtney revealed in July 2014 that she and Sixx are planning to have a child, her first.”