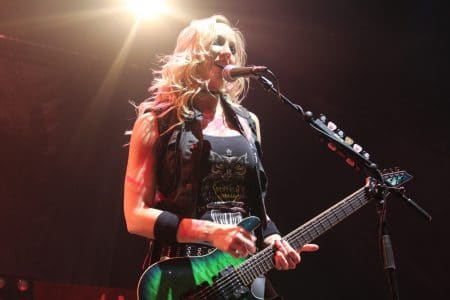 Strauss used to perform at home gigs for the AFL‘s L.A. KISS franchise. She was asked how many people auditioned for that gig to which she replied (with slight edits): “You know, I’m not sure that they looked into anyone else. I just remember going into a couple of meetings with Gene and Paul where they were discussing who was going to play the ‘National Anthem’ at the games. I’m not sure that they looked into anyone else, I just got a call asking, “Are you interested?” And my response was “Absolutely! Just tell me when and where to be!” [laughs] As a lifelong sports fan, especially as a lifelong L.A. sports fan, I was born and raised in L.A., to get the opportunity to play the anthem for an L.A. sports team is a dream come true. Also did I mention it was also doing it for Gene and Paul? That was simply icing on the cake! [laughs]”

In terms of what it was like to have KISS members Gene Simmons and Paul Stanley as her employers, Strauss advised: “I didn’t work directly with them, though I was little star struck the first time I met them. I mainly worked through the talent department, I didn’t work directly too much with Gene and Paul, but they were very nice to work for. When I was leaving and the last half of the season, I had a great conversation with Paul. I had just landed the Alice Cooper tour and had to make a decision to do one thing or the other. I had to let them know I was having to leave but I had a good reason! [laughs] This was the Mötley Crüe farewell tour with Alice Cooper supporting. Gene and Paul were extremely understanding. On the last day, Paul pulled me aside and said, “Listen, if we have to lose you to anyone, I’m glad it was the Alice Cooper organization because they are going to treat you really well.” I have a lot of respect for him because of that. He didn’t have to do that, but he did and that was really, really cool of him.”

You can read the rest of the interview with Nita Strauss at KNAC.