NiteRain release video of their Rocklahoma adventure in 2017

Norwegian sleaze rockers NiteRain have released a video of their adventure getting to and at the Rocklahoma Festival where they played for the first time on May 28, 2017. 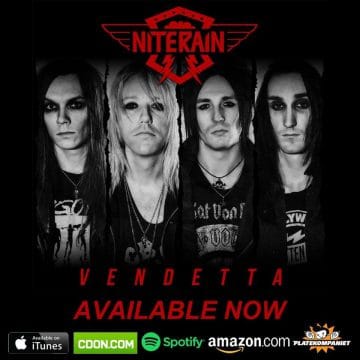 NiteRain‘s latest studio album Vendetta finished an impressive #7 on the Sleaze Roxx Readers’ Top 20 Albums of 2016. Sleaze Roxx stated the following in that regard: “Given the way the voting turned out for Twisted‘s debut EP, NiteRain‘s sophomore album Vendetta ending up at #7 is the most impressive finish out of all the results on the Sleaze Roxx Readers’ Top 20 Albums of 2016. Hailing from Norway, NiteRain continue to impress from being voted in to play at the Sweden Rock Festival in 2016 to being featured on prominent festival bills in the last few years such as the UK’s Hair Metal Heaven, USA’s Rocklahoma and Norway’s Tons Of Rock Festival. Clearly, the Norwegian rockers are doing something right and its starts with their music, which places the emphasis on melodies and harmonious backup gang vocals. NiteRain‘s sophomore effort Vendetta picks up where their debut Crossfire left off and the band simply delivers a rocking album from start to finish. With the band seemingly getting bigger and bigger popularity and exposure wise, it will be interesting to see if 2017 is the year that NiteRain break through in a big way. Whatever the case, NiteRain appear to have a bright future ahead of them given that their foundations (i.e. their songs) are rock solid.”

Tour video from NiteRain’s trip to the US for the Rocklahoma Festival 2017.FIND US ON:Facebook:https://www.facebook.com/niterainkicksassInstagram:https://www…