It’s been two years since Motörhead‘s frontman and rock icon Lemmy Kilmister passed away. Norwegian rockers NiteRain shared their story of when they first met Lemmy and the latter’s generosity towards them. 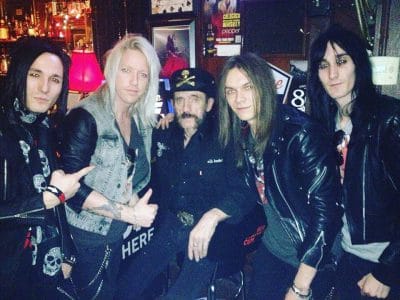 “Its been two years since Lemmy died. Which means its three years since we got to meet one of the nicest musicians of all time. Some of you may have heard this story and some of you might not have, so here it is ?

We had just got to Los Angeles for the first time and of course we were at the Rainbow a lot. One of these times Lemmy was there. Of course we went up and said hi, told him how much Motörhead meant to us and took a few photos. Lemmy then asked if we had tickets for the show at the Roxy, where he would be playing with The Royal Machines and we said that we didn’t. Myself, Frank and Sebastian went home to take a shower and go back to the Rainbow for drinks while Adrian stayed there, as he didn’t feel like leaving. About an hour later Adrian calls me and says that we are going to the show, when I ask how, he said: After you left, Lemmy turned to his manager and said “put these for guys on the list”! His manager said the show was sold out, but Lemmy simlpy repeated himself and after a while his manager came back and we were on the list.

When we thanked him after the show, he invited us to his 69th birthday party the following week at the Rainbow and said that if anybody asks, I invited you personally!

We gave him our album as a birthday present and thanked him for inviting us. He left the Rainbow with our album in his hand and promised to listen to it ?

We will never forget this, because Lemmy genuinely treated us as equal musicians and made a point to be welcoming as we had just got into town ?

We miss you Lem! Rest In Peace”