Nitro featuring the reunited frontman Jim Gillette and guitarist Michael Angelo Batio are back with a lyric video for track “It Won’t Die” which has the band adopting a very modern direction with their new song. 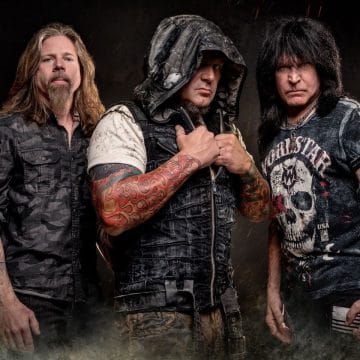 Metal Sludge recently interviewed Gillette and asked him what makes Batio unique aside from the guitarist’s speedy licks to which Gillette replied:

“He is light years beyond anyone out there. He can literally play anything on the guitar – and most things left or right handed. His musical knowledge is second to none. He has a degree in Music Theory. I could go on and on but suffice to say, he’s the real deal. There is no-one that has mastered the instrument the way he has. He can play anything anyone else can play and no-one can play what he plays. If they think they can – ask them to try it left handed. No contest. TKO. Mike wins hands down.”

In terms of Nitro playing live, Gillette stated: “Rolling Stone India just announced our first tour of both India and Napal since reforming. Within 48 hours of the announcement the 5 shows were selling out so quickly that the promoter added 3 more and it looks like another is coming. Song wise, a few old Nitro songs, a new one or two, some Lamb of God cuts, and a few surprise covers.”

You can read the rest of the interview with Gillette at Metal Sludge.