Out today via Mighty Music/Target Group, UK rockers NitroVille have released a lyric video for “Apophis 2029”, a track originally appearing on the band’s 2016 album Cheating The Hangman. As per the NitroVille‘s media release (in part with slight edits): 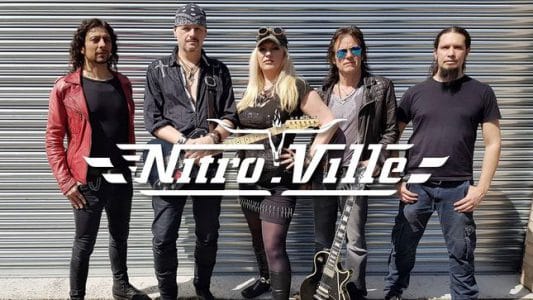 For a brief period in December 2004, there was a deep concern in the world, as the initial observations indicated a probability of 2.7% that the asteroid 99942 Apophis would hit the earth in April 13th 2029.

This 370-meter diameter beast could destroy an area the size of California or, should it hit the sea, cause tsunamis on a global scale. The impact on the globe would be massive and we could be facing changes similar to the ones that wiped the dinosaurs from the face of the earth.

Luckily, the most recent observations of 99942 Apophis ruled down the possibility of an impact both on Earth or the moon, but that brief period of worrying inspired UK rockers NitroVille to write the track “Apophis 2029”, about the event that could truly bring apocalypse to the human race. The track was originally released in the album “Cheating The Hangman“, released by Mighty Music in 2016.

But now it gets a video treatment in a very special time: 13th April 2019 marks the 10th pre-anniversary of the hitting date, the day the asteroid was predicted to hit the earth. And that is exactly with “Apophis 2020” talks about.

Guitar player Kurt Michael says about the song: “Celebrating the 10th pre-anniversary ahead of the world’s loudest BANG ever – the arrival of space rock Apophis 99942, the bringer of the apocalypse on Friday 13, April 2029 – now, if this ain’t METAL… “.

NitroVille have been teasing a new album for a few months, and is anticipated mid-2019.