NitroVille have just released the third single from their album Cheating the Hangman, which is called “Danger Zone.” 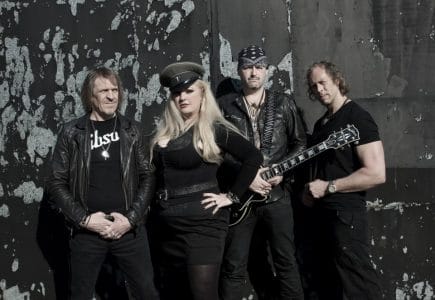 The London, England based band has been on Sleaze Roxx’s radar since February 2016 when their album Cheating The Hangman was reviewed.  Sleaze Roxx started its review by stating: “Sleaze Roxx has recommended many great records released by some awesome bands from a ton of different countries over the years. But I have to say, NitroVille’s newest blew me away. Once in awhile an entire album of solid hard rock with no filler like this one comes along.”

Sleaze Roxx‘s review goes on to state: “Cheating The Hangman is seriously infused with Southern US style hard rock. From the guitars, to the lyrical references, even a blues influenced lead vocal, this album rocks. Sleaze Roxx concluded its review of Cheating The Hangman by stating: “I was not surprised to find out that on one of NitroVille’s previous releases, they worked with producer Bob Marlette, who also worked with Black Stone Cherry. While there are similarities to Black Stone Cherry, NitroVille went their own way with a more pure guitar sound and scaled back production. Interestingly, the album was produced on 100% analog equipment, which lends itself to this signature sound. Sleaze Roxx would be hard pressed not to have this record into the running for its top 10 albums of 2016. I know it’s early in the year, but these things stick with you!”