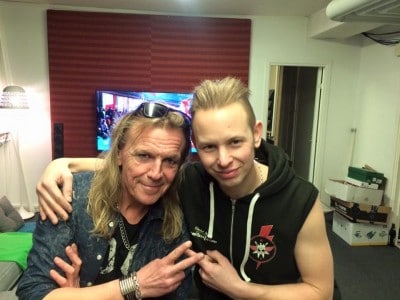 Nordic Union — the new project from the all-star duo of Pretty Maids‘ lead vocalist Ronnie Atkins and hotshot Swedish producer Erik Martensson — have released a video for the song “Hypocrisy” from their debut self-titled album, which will be released on January 29, 2016.

Sleaze Roxx stated the following in its review of Nordic Union: “What happens when you combine the classie heavy metal voice of Pretty Maids‘ long-time lead vocalist Ronnie Atkins with young hotshot producer and songwriter Erik Martensson of W.E.T. and Eclipse fame? You get one heck of a melodic rock debut album — that’s what you get! If you like H.E.A.T. and Masterplan, odds are that you are going to enjoy Nordic Union‘s self-titled debut album. The songs that can be found on Nordic Union are certainly catchier and more commercially accessible than what Atkins has come up with in Pretty Maids but the tracks retain Atkins‘ at time gritty voice. Every track on Nordic Union is a good one.”