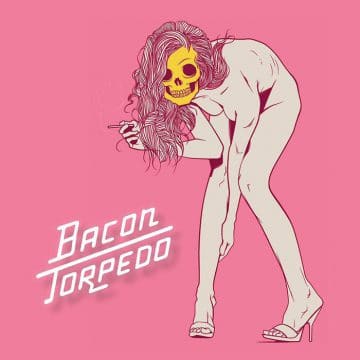 The group’s Bio indicates in part (with slight edits):

“We are four musicians which have played in different bands earlier, and started Bacon Torpedo as a cover band playing our favorite songs from the 70s and 80s, the golden age of rock n roll.

We saw that rock music are really in a down period and want to take it back, so we started to write our own music. Our influences are for example: Mōtorhead, AC/DC, KISS and Iron Maiden. as well as Scandinavian bands which we grew up with: Hellacopters, Gluecifer, Turbonegro and Backstreet Girls.

As kids living in outskirts of Norway, no bands ever came around so we always dreamed of releasing our own rock n roll music some day.

We are already making more music, and we are planning realizing the EP as a vinyl 7 inch during spring.

We want to make hard rock music that people can rock out to in bars, so we would love to tour a much as we can.

Now we have just recorded our first self-titled EP, consisting of four rock tracks which we hope you’ll enjoy.”

You can check out Bacon Torpedo‘s music at the group’s Bandcamp page.