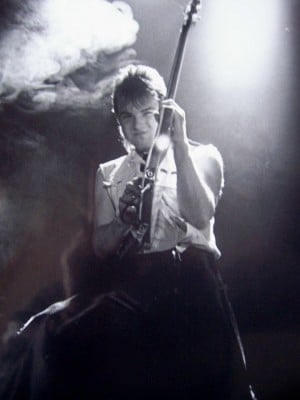 “Briar formed in 1979 in Birmingham, UK. Founding member and Briar drummer Dean Cook recollects: “Briar started as a school band, at school myself Dean Cook & Kevin Griffiths were into Motorhead, UFO, Black Sabbath, etc and all our mates were the same so we decided to start a couple of bands, just really to play in the school hall… The band myself & Kev started was I think called Emerald or Lucifer; can’t remember which… but we went through both of those names at some point. I’ve gotta be honest I can’t remember the names of the people in that original band but we became a band (kinda) for real when we got our mates David Tattam (bass) & Dean Rogers (guitar) involved.”

In 1982, the line-up was solidified with the classic line up when Darren Underwood and Dave Fletcher joined the band and Kevin Griffiths switched to bass. That was just before releasing the first 7” “Rainbow In The Skies/Crying In The Rain”. The classic line up was Kevin Griffiths (bass & vox), Darren Underwood (guitar & background vocals), Dave Fletcher (guitar & background vocals) & Dean Cook (drums & background vocals). Just before that, Briar teamed up with manager George Bond that helped out through the band’s entire carreer and it was a very important moment for the band. The first big break came when Briar won a competition in Birmingham called “The hottest band in town.”

The win caught the attention of Wolverhampton based label FM Revolver and their subsidiary Heavy Metal Records. The debut album Too Young was recorded and released in 1985 and it was very well received by fans and media alike. Hot on the heels of Too Young, they put out their sophomore effort Take On The World in 1986 on the GBB label (re-issued on CD by Battle Cry Records in 2012) which was a great album filled with ’80s metal flavoured by pop melodies and choruses. This album landed Briar a major label deal with Sony/CBS Records. Through them, the classic third album Crown Of Thorns was released in 1988 and spawned a hit single in “Frankie” that saw rotation on MTV. To show they had more in store, Briar immediately went into the studio and recorded another full album worth of material called Reach Out which remains unreleased to this day. 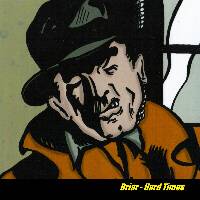 Unfortunately, the deal with Sony/CBS fell through and after another 7” single, the band recruited lead singer Kevin Billington and keyboard player Jez Prosser making the band a six man band. The six bonus tracks on Hard Times were recorded by that line-up. However that line-up fell apart in 1992 and Kevin Griffiths took back the mike and guitarists Dave Fletcher and Darren Underwood were replaced by Mark Carleton. The eight track album Hard Times was released in 1992 in a very limited number.

Dean Cook remembers the recording process: “Hard Times represents the final chapter and an important part of the Briar story. To be honest, the band had got to the point where we all felt we were starting to try and play what people were buying as opposed to what we actually wanted to play!… We had written and recorded the tracks with our longtime manager & producer George Bond in our own studio, initially as a demo but a few people had heard it and loved it so we eventually put out some promo CDs and cassettes. At the time, it was a minimal release but sadly pretty soon after that, the band had truly run its course and in 1993, we played our last show!”

With this joint release by Battle Cry Records/Mighty Monster Records, some justice will finally be done. Hard Times is packed with melodic hard rock with huge hooks and meodies to die for. Although there is a more frequent use of keyboards, you will instantly recognize that this is Briar. Remastered and repackaged with lyrics, pictures and linernotes spread over an eight page booklet. The power chords, the pop melodies, the riffs are all there finally for everyone to enjoy!” 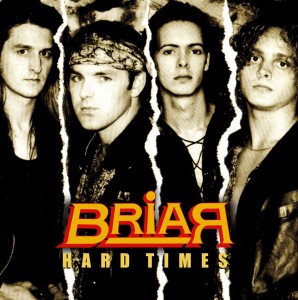