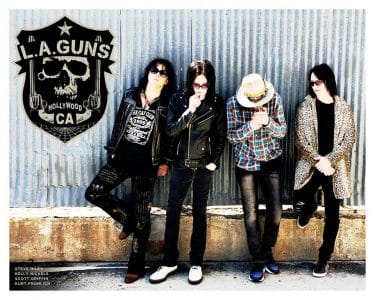 The L.A. Guns version consisting of drummer Steve Riley, bassist Kelly Nickels, lead guitarist Scott Griffin and lead vocalist / rhythm guitarist Kurt Frohlich has wasted no time as the band announced yesterday that it recorded a new studio album in only seven days. The studio album will be released via Golden Robot Records in 2020.

The group also appears to be a part of the M3 Rock Festival‘s line-up for its 2020 edition based on where the group is positioned on the festival’s poster for Day Two. Riley and Nickels‘ L.A. Guns version played its debut gig at the M3 Rock Festival last year and Sleaze Roxx ranked the group’s performance at #5 out of 21.