Once Around featuring Tango Down bassist Axel K. Gessner have signed with Born To Be Records and released a new single entitled “Devil Inside.” 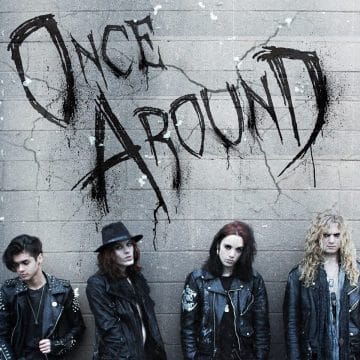 Born To Be Records‘ press release states in part (with slight edits):

“Madison, WI glam metal act Once Around have signed a deal with Born To Be Records + Music Management. Their new single (and first on the BTB label) “Devil Inside” has just been released for worldwide distribution.

According to Once Around lead singer, Sebastian Sikk, “Our last single “Idol” got your attention, but “Devil Inside” will grab you by the throat. This is the first chapter to our story and the fire starts now!” Lead guitarist, Wrath Starz added, “This is one step closer to who we are, rock is dead and we are gonna bring it back to life! Come along for the ride! Let’s go!” The new single by Once Around “Devil Inside” can be streamed and downloaded now at www.borntoberecords.com.

Once Around is currently in the studio working on a 5 song EP that has a target release date of July 7, 2017. The band will be hitting the road this summer in support of their new material. A US tour is planned and will be starting off with a performance at Brat Fest in Madison, WI on May 29th. Full tour dates announced soon. In the meantime you can catch them live, doing tour warm-up shows, opening for The Rumors:

Once Around is a Madison, Wisconsin based band that have successfully combined hardcore and glam metal to create an original sound that emerges both live and on record. With an image and sound that sets them apart from the rest, Once Around is the complete package. Think Motionless In White meets Motley Crue. The band consists of lead vocalist Sebastian Sikk, lead guitarist Wrath Starz, bassist Axel K. Gessner, and drummer Chase. Why call the band Once Around? Because a band this good only comes around once in a lifetime. The band’s motto: You only go once around in this life, so make it count! Once Around is young, loud, fast, raw, and ready for the big time.”