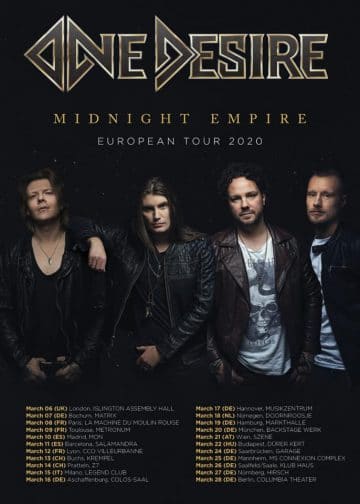 Finnish melodic rockers One Desire will be releasing their new studio album Midnight Empire during the first quarter of 2020 and heading out on a big European tour starting on March 6, 2020.

The following message was posted on One Desire‘s Facebook page on December 6, 2019:

The new album is called “Midnight Empire”. It’s a bomb and it drops first quarter of 2020. We have been working really hard the whole year and the mixes are next to done. Midnight Empire will be mastered in 2 weeks. We love it and we think it’s the perfect follow up to the debut.

One Desire is heading out on a big European Tour in 2020 starting March 6th (UK) London. We are joining our friends in The Night Flight Orchestra and it will be an awesome spectacle.