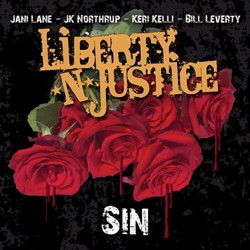 The single “Sin” from Liberty N’ Justice, featuring one of Jani Lane’s final recordings, will soon be available for digital download through iTunes. The song was written by JK Northrup, Justin Murr, Jani Lane, Keri Kelli, and Scott Bolan.

Said Liberty N’ Justice founder Justin Murr, “We are deeply sorry for the untimely passing of Jani Lane. Like many stars, his light burned very brightly but faded too quickly. We have one of, if not the last, recording that Mr. Lane finished in the studio. We have witnessed an out pouring of emotion from the world’s music community regarding Jani’s death. We feel obligated to his family, friends, and fans to share one of his last artistic endeavors. This single “Sin”, was originally scheduled for release in early 2012 as part of a double CD from Liberty N’ Justice entitled ‘The Cigar Chronicles’. The song along with Lane features JK Northrup of King Kobra (who recorded and mixed the track), Keri Kelli of Alice Cooper, and Bill Leverty of Firehouse.”

CJ Snare of Firehouse/ Rubicon Cross — “Jani Lane was the Vincent Van Gogh of “Hair Band Melodic Hard Rock.” A brilliant artist wrestling with his inner self. I came to know him through years of touring together and through many conversations. It was difficult to see him fight with his demons. He was my friend, my contemporary, and he will be truly missed.This may be one of, if not his last recording.The performance has a poignant message in relation to his life story. I know that for him, Rock and Roll Heaven is indeed, not too far away !!! Nothing but Love to you my Brother, Jani.”

Bill Leverty of Firehouse — “In March of 2011, I was asked by Justin Murr to play on a song called “Sin”. I gladly excepted the offer because Liberty n’ Justice always puts out great music. The demo had a scratch vocal by the co-writer, JK Northrup that sounded really good, but I did not know who was going to be chosen to sing the real vocal. I’ve just learned that I was matched up with Jani Lane. I will tell you that Jani did an amazing job with his vocals. I am truly honored to be playing on this recording, which is quite possibly the last recording Jani ever made. I have extremely fond memories of touring with him since 1991 when we all became good friends on Warrant’s “Blood, Sweat, & Beers Tours”. Firehouse has played well over a 100 shows since then with Warrant and with Jani’s solo gig. Our friendship has never faded. This song’s lyrical content is very timely, and shows Jani in anextremely vulnerable and honest light, where he bares his soul in an uncanny way. RIP my brother, your music will always be with me…”

JK Northrup — “Like everyone, I was shocked to hear about the passing of Jani. I was privileged to have opened a show with Warrant in Los Angeles at a large venue called “The Country Club”. It was a sold out show, and just before they got signed! It was easy to see why Jani and Warrant would make such an impact on the music world with his stage presence and song writing abilities. Now some 24 years later, I found myself working with Jani on a song called “Sin” for the upcoming album with Justin Murr’s “Liberty N’ Justice” called “The Cigar Chronicle’s”. Jani’s vocals and input on this song are very powerful! Although it was not intended for release until 2012, all involved felt the importance to get this song out to all of his fans to hear this amazing song. I know he will be smiling when this song is heard by all. My sincere condolences to all of his family and friends. He will be missed, but not forgotten! R.I.P Jani Lane!”