The DDR Music Group has unearthed another gem from the late ’80s / early ’90s and has released an album titled The Legacy from glam rockers Oney.

The group previously released an EP titled Good Guys Wear Black back in 1989 (which was re-issued by Retrospect Records in the mid-2000s) and the full-length album Bust ‘Em Down via Retrospect Records in the mid-2000s. The Legacy includes all 16 songs from those two albums along with two additional tracks. Oney also released the album Good Guys Are Back in 2015, which includes some of the songs from those albums, a few demos and some live tracks. 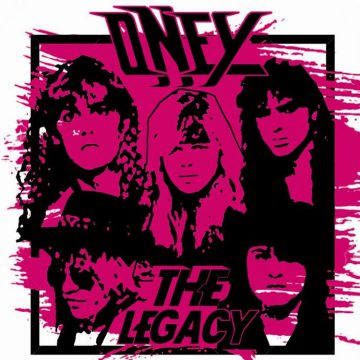 “ONEY had arrived in style to the DDR Music Group family!! Armed and ready the band delivers 17 studio recordings on a Glam Metal platter any true fan of the genre would have a tough time passing up.

From 1987 to 1992, ONEY ripped through the Midwest and southern United States with reckless abandon leaving in their wake a legacy of amazing songs and unforgettable live shows. They shared the stage with bands such as Helix, Faster Pussycat, Enuff Z’ Nuff, Leatherwolf, Peter Criss and fellow DDR Music Group recording artists Shock Tu.

Combining the sounds of Cheap Trick, Kiss & Tigertailz (to name a few) the boys brought the noise with infectious tracks such as “Rock Crazy”, “Tabletop Dancer”. “Miss Metropolis”, “Bust Em Down” & “She Wants It All”. They played loud, hit hard and have now officially made nearly 80 minutes of music available on one disc which is nothing short of an 80’s treasure.

This album is digitally remastered and packaged in an 8 page booklet with a full set of lyrics.

This CD is silver pressed, officially licensed from the band and exclusively available from the DDR Music Group.”