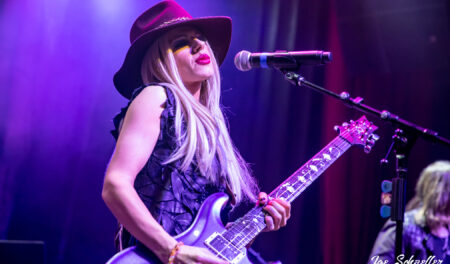 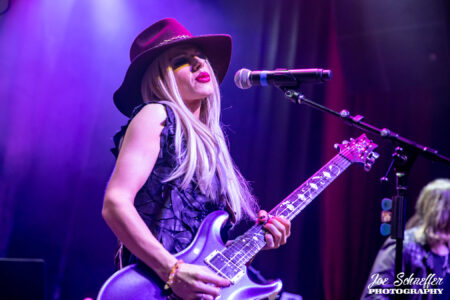 The female guitarist was part of Alice Cooper‘s band from 2011 to 2014. Earlier this month, Orianthi‘s replacement Nita Strauss announced that she was leaving Alice Cooper (to be part of Demi Lovato‘s band). Kane Roberts ended up getting announced as Strauss‘ replacement for upcoming September and October tour dates.

DiCecco asked Orianthi whether she had been contacted about replacing Strauss before the announcement that Roberts would be rejoining the shock rocker. Orianthi replied:

“So, Alice reached out to me not too long ago about joining him for some festivals in Europe. I don’t know, I guess Nita couldn’t make it, like, she was doing something. Then she ended up being able to make it, but I was gonna get on a plane and rush over there and guest with him. Look, with Alice, the door is always open in the sense that we’re a family. I love him dearly, I love Sheryl [Cooper], I love the whole band; they’re my brothers. Any time, like when it comes to guesting with Alice, I am there, absolutely, because I love the band and it’s so fun. I’m an artist – I have my own career, too, which I really wanna focus on with my records and what I’m doing – but any time that Alice calls me, I am there. A hundred percent. And if he wanted me to join him in the future for a run, absolutely.

I got a lot of messages when Nita left, “Are you gonna go and do it?” Like, literally, my phone was blowing up. And I was like, “I don’t know. That would be cool.” Look, there’s so many things that go into play with that kind of stuff; it’s what’s fitting for Alice, it’s what’s fitting for me. With Kane joining, he’s got that kind of that metal edge, which Nita has. She’s a different player than I am and it’s a different sort of vibe. I bring more the blues-rock kind of vibe to his thing. It was fun, it was really fun. I think that we have our set personalities. I mean, all the guitar players do; from Tommy Hendrickson, he has that edge, to Ryan Roxie, who has that old school playing and his phrasing’s great, and Nita brought the real shred fest theatrics and she’s awesome. So, it’s like what character fits this run? I mean, honestly, that’s where it’s at. With Alice, the door is always open; we’re all family here. It’s a great thing. It’s a really great vibe, and I love them all. So, whatever happens in the future, I’m down. Alice calls, I’m there. When Alice calls me to join the Christmas Pudding, I’m there. Hollywood Vampires, I played on that record – guested with him a few times with that, too. He’s a lovely, amazing, incredible artist, so any time he calls, for sure.”

You can read the rest of the interview with Orianthi at Vinyl Writer Music‘s website.