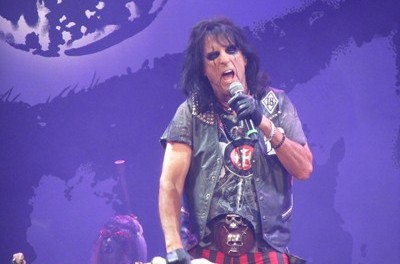 History was made recently when the remaining members from the original Alice Cooper band played live together for the first time since 2011 in two separate venues in Dallas, Texas, USA on October 6 and 7, 2015. Alice Cooper and guitarist Ryan Roxie first joined original Alice Cooper band members Michael Bruce (guitar), Dennis Dunaway (bass) and Neal Smith (drums) for an intimate eight song set at Good Records in Dallas, Texas, USA while Dunaway was promoting his book Snakes! Guillotines! Electric Chairs!: My Adventures in the Alice Cooper Group.

Bruce, Dunaway and Smith then joined Alice Cooper and his backing band for a spirited version of “School’s Out” the next night at the American Airlines Center in Dallas, Texas, USA.

The only original Alice Cooper band member that was of course missing for both performances was guitarist Glen Buxton who passed away at the age of 49 back on October 19, 1997 due to complications with pneumonia.

The classic original Alice Cooper band members released seven albums together from 1969 to 1974 including the classics Love It To Death (1971), Killer (1971), School’s Out (1972) and Billion Dollar Babies (1973) before disbanding and lead singer Alice Cooper continuing as a solo artist and still going strong 40 years later.