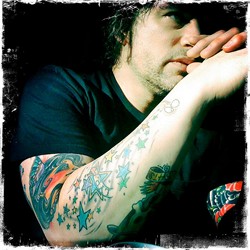 The new album title ‘Different Roads’ came about when the first original title ‘New York City Night’, and song of the same name, were originally included on the singer’s 2007 album ‘Drive My Karma’. The ‘Different Roads’ album and video for the title track are slated to be released this fall 2013. ‘Different Roads’ is an Americana/folk/country album that comes across loud and clear with true heartfelt stories. Recording, engineering and mixing is being handled by Fran Smith Jr. of The Hooters in New Jersey.

“The new album delivers Americana/Folk/Country that’s organic and honest,” says Davidson, best known for his work on Britny Fox’s platinum selling 1988 debut album. “I don’t write songs aiming to be a hit song. I just tell stories through songs — period. When I write the story of my life, I don’t let anyone hold the pen. It’s not about anything flashy. It’s just honest, real and simple.”

‘Drive My Karma’, featuring Rob Hyman (The Hooters) and Kenny Aronoff (John Mellencamp), will be re-released on iTunes later this year followed by a music documentary called ‘Underdog Of The Underground’ in December.