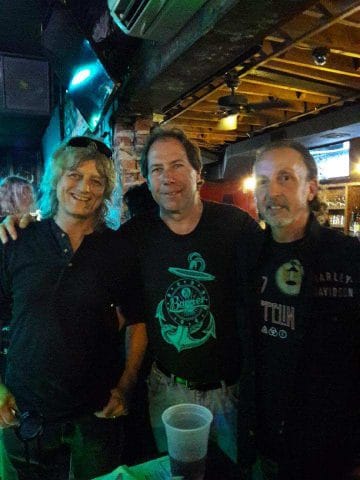 Speaking exclusively to Sleaze Roxx, Morris stated: “We formed the band back in 1980 with Bobby, Charlie and me and singer Annie Mincielli (she quit in 1981) and played the Long Island/New York club circuit from 1980 until 1983, 1986 until 1988, 1993 (three reunion shows). We reunited again in 2018 and played at the February’s 40 year anniversary reunion show at KJ Farrell’s in Bellmore, New York on Sunday, May 20th and Katie‘s last Saturday, August 11th and will continue to play together moving forward. We hope to celebrate our 40 years together in 2020.

Back in 1981, Frank C Starr who later played in Alien and the Four Horsemen sang with us for four months. Frank Vestry from Marcello/Vestry sang with us from late 1981 into 1982 and Charlie Gildart played drums with us from 1986 until 1988 when Charlie Held left the band for a few years. Bobby and me were the only two people that played together throughout the history of the band and Charlie Held rejoined in 1993 for the three reunion shows and 2018.

We started out playing covers but also had originals from day one. Bobby wrote all the songs over the years with a little help from Charlie and me. All eleven songs we played on Saturday night are over 30 years old and songs like “Scavenger,” “Something To Live For,” “Look Out For Lightning” and “Teeth Bleed” were written back in 1980-81. They still sound great today after all these years and it was the best set we ever played together and everyone really enjoyed the show and had a blast!”